The HeLa S3 cell line is a derivative of the immortal HeLa cell line and is also considered immortal, sharing many similar properties with the HeLa cell line, as a result. The difference between the famous HeLa cell line and the HeLa S3 cell line is that S3 represents the third clone isolated and propagated from the original HeLa culture. The letter S was used in honor of Dr. Florence Rena Sabin, though this cell line originated in the lab of Dr. Theodore Puck. HeLa S3 was established in 1955 and has been used for studies in cloning of mammal cells. It also has similar properties to the famous HeLa cell line, named after Henrietta Lacks, from which it was derived. The HeLa cell line was established using cervical cancer cells taken in 1951 from Henrietta Lacks, a patient who eventually died of her cancer later that year. The HeLa cell line considered an “immortal” cell line and had been used in a wide variety of scientific research. These cells have received a lot of media attention, due to the controversy surrounding patient’s rights. The HeLa cell line was in fact the first human cell line to be able to establish itself and be successful in a cell culture. In addition to being an indispensable tool in conducting a wide variety of specialized biomedical applications, the HeLa S3 is beneficial for mammalian cloning research. The HeLa S3 transfection reagent kit for cervical adenocarcinoma offered by Altogen Biosystems, among many other transfection products, yields high transfection efficiency of siRNA delivery. Besides, it produces high-level recombinant protein expression with minimal disruption of cell function and has low cytotoxicity. 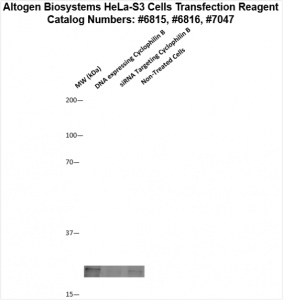