According to a 2014 article in Molecular Pharmaceutics, pharmaceutical inhalation research is limited due to the lack of extensively studied and well characterized in vitro models of human distal lung epithelial phenotype. However, research shows that NCl-H441 cells can potentially serve as a robust model system of human distal lung epithelium. The NCI-H441 cell line was initially established in 1982 by A.F. Gazdar, M. Brower, and D. Carney and associates. The cells were derived from the pericardial fluid from a male patient with papillary adenocarcinoma and can be cloned in soft agar. NCI-H441 cells exhibit an epithelial cellular morphology and express major surfactant apoprotein (SP-A). Also, they have shown to be able to express pulmonary surfactant protein (SP-B). The NCI- H441 cell line has been known to have a doubling time of approximately 58 hours. NCI-H441 cell line is considered an excellent host for a variety of biomedical applications as well as for lung cancer research. Altogen Biosystems offers polymer-based biodegradable transfection reagent kits for the NCI-H441 cell line. 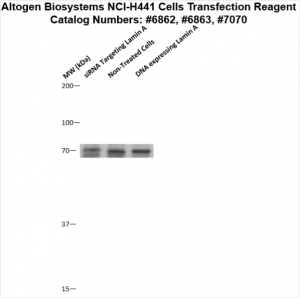 Figure 2. Protein expression of Lamin A in NCI-H441 cells. DNA plasmid expressing Lamin A or siRNA targeting Lamin A were transfected into NCI-H441 cells following Altogen Biosystems transfection protocol. At 72 hours post-transfection the cells were analyzed by Western Blot for protein expression levels (normalized by total protein, 10 µg of total protein loaded per each well). Untreated cells used as a negative control.