The KB cell line was first believed to be established from a removal of human mouth epidermal carcinoma of the nasopharynx, a type of throat cancer. KB cells exhibit an epithelial cell morphology and are known to produce keratin. Many medical applications exist for KB cell line. However, recent testing has identified HeLa cell line marker chromosomes in the KB cell line, and through DNA fingerprinting, KB cells are now thought to have been produced due to HeLa cell contamination. Furthermore, KB cells contain human papillomavirus 18 sequences, just like the HeLa cell line does, and are positive for keratin by immunoperoxidase staining. The KB line is also used as an assay for antineoplastic agents. An endoribonuclease which cleaves tRNA precursor molecules has been partially purified from human KB tissue culture cells. KB cells have been used by the National Cancer Institute as an antitumor assay for screening plant extracts.

Now KB is known to be a subline of the KERATIN-forming tumor cell line HeLa that was established in 1951 using cervical adenocarcinoma cells taken from Henrietta Lacks, a 31-year-old working-class African-American woman who died of cervical cancer. The HeLa cell line is the first human cell line successful in vitro in a cell culture that is also considered an “immortal” cell line. HeLa cells have received media attention because of the controversy over patient’s rights as the cells were taken without the permission or knowledge of the patient and her family. The HeLa cell line has played a vital role in the development of a polio vaccine and contributed to the telomerase discovery. Altogen Biosystems provides reliable transfection reagent kits for the KB cell line. 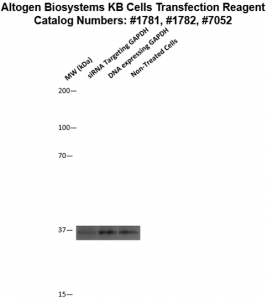