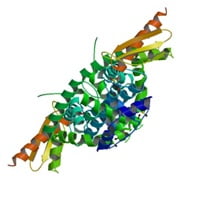 RNAi (RNA interference) is a recently discovered phenomenon that has burst to the forefront of genetic research. Recent breakthroughs have shown that RNAi plays an important role in defending against several types of viruses and is also involved in a number of regulatory mechanisms within the cell.

At its core, RNA interference is a phenomenon by which the expression of double stranded RNA (dsRNA) stimulates a specific cellular process that reduces gene expression in a sequence-specific manner. Small synthetic RNA, termed small interfering RNAs (siRNA), which are typically 21-28 nucleotides in length, can induce RNAi and knockdown gene expression in mammalian cells without inducing an antiviral response.

Biochemical studies have elucidated the mechanism of RNAi in the past few years: double stranded RNA is processed by an enzyme known as Dicer, resulting in the production of siRNA molecules. These molecules are then able to form a multi-protein siRNA complex, RISC. The RISC/siRNA complex catalyzes the cleavage and degradation of the complementary mRNA molecules.

As a simpler explanation, RNAi cleaves the messenger RNA molecules that are meant to transport gene-encoded information to the protein processing organelle of a cell, neutralizing specific mRNA molecules, and thereby inhibiting the development of specific proteins.

RNA Interference was discovered in 1998 by Andrew Fire and Craig Mello, and has since grown and developed into a highly efficient and respected method in molecular biology. The discovery even earned the two researchers the Nobel Prize in Physiology of 2006. Such quick rise in international fame led to further investment into RNAi technology, and nowadays the process has been brought to the commercial market, with a chance at becoming the foundation of novel therapeutic methods.

A number of RNAi capacities are recognized and studied, including messenger RNA (mRNA), which is responsible for transporting the genetic information containing instructions for synthesis or creation of proteins. Viruses are capable of encoding or implanting their own genetic information into cellular structures using the RNA genome — genomes include genes as well as non-coding sequences of DNA and RNA. Messenger RNA is vital in instructing the cell’s growth and protein synthesis, and without that information, a gene remains, for all intents and purposes, dormant or inactive. As a double-stranded RNA molecule enters a cellular structure, it triggers RNAi, which is divided into smaller fragments that tell the cell to replicate, matching the specific genetic sequence of those fragments. Then, these smaller segments of messenger RNA (mRNA) are rendered inactive due to their inability to pass along their “messages” or data, which shuts down the synthesis of the corresponding gene.

The use of RNAi applications, including small interfering RNA (siRNA), to reduce cellular gene expression appears to have significant advantages over other approaches for targeted gene regulation. The potency of siRNA molecules, sequence-specific design, and ability of siRNAs to be re-used to guide mRNA degradation in cells bears a significant advantage over anti-sense oligonucleotides and ribozyme-stem approaches. Well-designed and functional siRNAs are capable of effectively bypassing the interferon response in order to induce specific post-transcriptional gene silencing or RNA interference in vitro and in vivo.

However, RNAi technology has its caveats; off-target effects are possible, and the difficulty of delivering the necessary siRNA sequences into cells has prevented the technology from becoming a commonplace therapeutic technique. Research has been incredibly helpful in resolving the issues with RNAi delivery, and several companies now offer specialized reagents for siRNA delivery. Such reagents can help efficiency of RNAi experiments and improve our understanding of how the mechanism can be used for therapeutic purposes.

RNAi has been investigated and recognized for its potential to become a powerful gene therapy. The technology, allowing for selective inhibition of protein expression, can help problems with over-expressed genes in diseases such as achondroplasia (a type of dwarfism). If RNAi technology can be utilized in all cells of a human, then restricting the over-expression of certain proteins is simple. The main barrier, as it seems, has been the delivery of compounds into cells – a topic currently being researched by a variety of companies.

RNA interference (RNAi) has been used for in vivo target validation studies using animal models. The major challenge in performing RNAi studies in vivo is the effective, directed delivery of functional small RNA molecules into specific tissues. ALTOGEN® In Vivo Transfection Reagents could be conjugated with siRNA (or microRNA) and administered intratumorally (i.t) or systemically via intravenous (i.v) tail vein injection in order to provide directed gene silencing in specific tissues, including liver, pancreas, kidney, and tumors. Selective knockdown could be seen as early as 24 hours after injection.

Altogen Biosystems is a life sciences company dedicated to the development, marketing and manufacture of cell type specific transfection reagents. Efficient delivery of DNA and RNA enabled by advanced formulation of reagents and peculiar design of protocols. Altogen Biosystems offers a complete transfection system for a broad range of cell lines. All reagents are functionally tested to be highly reproducible, serum compatible, induce low toxicity, and can be used for co-transfection experiments, and high throughput applications.