Human diploid cell strains are cells that are frequently utilized for various purposes, including culturing viruses for the vaccine production. Studies have shown safety and immunogenicity of human diploid cell strains compared to other tissue cultures. The MRC-5 cell line represents the most common human diploid cell line in the manufacturing of currently available human viral vaccines. MRC-5 was derived by J.P. Jacobs and colleagues from the pulmonary tissue of an aborted 14-week-old male human fetus in 1966. This is a normal diploid human cell line with 46, XY karyotype. The modal chromosome number was 46, occurring in 70 percent of cells. The rate of polyploidy was 3.6 percent. The line exhibits adherent growth to glass and polymer culture dishes. MRC-5 are capable of 42 to 46 population doublings before senescence occurs. MRC-5 cells have been shown to be negative for reverse transcriptase, and they support the growth of a broad range of viruses, including adenoviruses, coxsackie a, cytomegalovirus, echovirus, herpes simplex virus, poliovirus, rhinovirus, respiratory syncytial virus, and varicella-zoster virus. MRC-5 cells are extensively employed in a wide array of applications, such as virology-related transfection experiments, cytotoxicity assessments, and the development of vaccines. MRC-5 is useful as a transfection host, and in many kinds of molecular and cell biology research, in part due to its ability to be easily infected by viruses. This cell line is commonly employed for testing of viruses in biomedical research experiments. Altogen Biosystems offers an advanced nanoparticle-based liposome formulation MRC-5 transfection reagent kit for diploid fibroblast cells that exhibits high transfection efficiency, as detected by qRT-PCR. 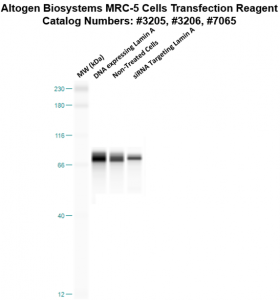