Neuroblastoma originates from embryonic neural crest cells and is the most common extracranial solid tumor, affecting children and leading to poor prognosis due to bone metastasis. According to a 2014 article in the Journal of Bone Oncology, mice inoculated with the SK-N-AS neuroblastoma cell line developed bone metastasis like most human neuroblastoma patients. Neuroblastoma represents nearly 6% of all childhood malignancies, with approximately 700 new cases diagnosed annually in the United States, as per the American Cancer Society. The SK-N-AS cell line is isolated from a bone marrow metastasis of a 6-year old female. SK-N-AS is hyperdiploid human cell line with the modal chromosome number of 47. Normal chromosomes N9 and N22 are single. SK-N-AS are distributed for research purposes only by the Memorial Sloan-Kettering Cancer Center. The SK-N-SH line was derived by J.L. Biedler and is different from SK-N-MC as it displays higher levels of dopamine – beta-hydroxylase as well as a longer doubling time. Also, SK-N-SH is used in cell-mediated cytotoxicity assays as a target cell line. Frataxin-depleted cells display actin network reorganization that can be observed in fibroblasts. The cells were similar to control SK-N-AS cells after Nrf2 staining. It has been shown that treating control SKNAS cells by oligomycin or tBHQ can result in the accumulation of NADH quinone oxidoreductase, glutathione-S-transferase subunit 1 and glutathione reductase.  These cells are known to produce large amounts of IGF-2 and express type 1 IGF (insulin-like growth factor) receptors. SK-N-AS cells can be useful in the study or search for medical treatments for certain types of brain cancer. Altogen Biosystems offers in vitro SK-N-AS transfection reagent for neuroblastoma cells. 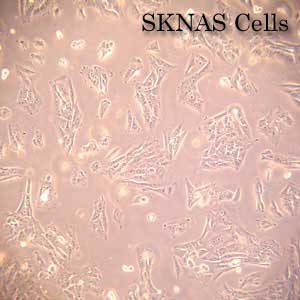