According to the Colon Cancer Alliance (CCA), the incidence rates for colon cancer are on the rise in patients younger than age 50, and new treatment regimens are desperately needed. The tumorigenic HT-29 colon cancer cell line is an important tool for the synthesis and investigation of novel cancer drugs. HT-29 was derived in 1964 from the tumor of a 44-year-old woman with colon adenocarcinoma. HT29 cells are human intestinal epithelial cells, which produce the secretory component of Immunoglobulin A (IgA) and carcinoembryonic antigen (CEA). The HT-29 line is designated heterotransplantable, forming well-differentiated grade I tumors. The structure of HT-29 cells include microvilli, microfilaments, mitochondria, smooth and rough endoplasmic reticulum with free ribosomes, lipid droplets, limited primary lysosomes and many secondary lysosomes. The cells express urokinase receptors but do not have detectable plasminogen activator activity. HT-29 cells have been shown to be negative for CD4, but there is expression of galactose ceramide. HT-29 cells are commonly employed for tumorigenicity studies. Also, the HT-29 cell line is extensively used as model system to study epithelial differentiation in vitro. The HT-29 cell line a suitable host for gastric cancer research as well as for studying human infections related to the stomach. Altogen Biosystems offers nanoparticle-based transfection reagent kits that have shown low cytotoxicity for the HT-29 cell line. 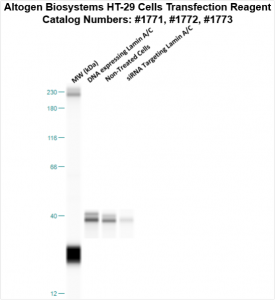