Transfection, the technique of transferring foreign particles and nucleic acids into cells, is a powerful technique that can be facilitated through chemical means. Transfection reagents are used to enhance the efficacy of genetic experiments, allowing for substantial research to be conducted in the fields of applied gene therapies and the incredible functionality of the genome. In all transfection experiments, the means by which compounds are delivered into cells must be carefully selected. Although viral-mediated transfection has shown certain efficiency, it can also carry some significant immune responses. As a consequence of viral effects coming from transfection, chemical alternatives have been developed. A few of the most prominent chemical-based transfection reagents are described below. 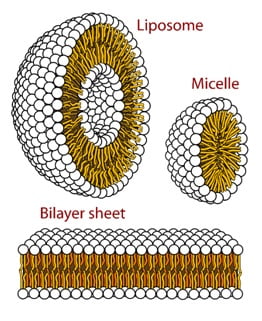 Liposomes are cationic lipids that encapsulate negatively charged nucleic acid sequences. They are attracted to the cell membrane and are integrated into the host cell via endocytosis. The endosome enzymes break down the liposome, and the DNA fragment is released into the cytosol. These vesicles are artificially created from phospholipids, mainly from mixtures containing both negatively charged and neutral lipids that are capable of automatically interacting with the nucleic acids, forming stable structures that enter the cells. The method is relatively nontoxic and ensures the integration of large DNA fragments into the host cell, with high efficacy.

Polyethylene glycol-cholesterol (PEG-Ch) conjugates that have been modified with targeting ligands and molecular conjugates are used for improving the efficacy of the liposome transfection. The Ch2-PEGn can be obtained by esterification, using succinic anhydride cholesterol and polyethylene glycol dissolved in chloroform, concentrated under a vacuum and purified on silica-gel. The cationic liposomes can be obtained by dissolving a mixture of chloroform, Ch2 -PEGn­, and DOTAP in chloroform and the removal of the solvent under a rotary evaporator that enhances the formation of a thin lipid film that can be further dried under a vacuum, plus an addition of a 5% glucose solution and sonication.

Cationic polymers bind to negatively charged nucleic acid sequences and the positively charged complex is attracted to the cell membrane and integrated into the host cell via endocytosis. Such reagents include PLGA (poly-lactic-co-glycolic acid), a food grade polymer that can be safely used for transfection procedures, and PBAE (poly-β-amino ester), a polymer that is capable of protecting DNA molecules that are to be delivered inside a host cell. These polymers obtained from PLGA (poly-lactic-co-glycolic acid) and PBAE (poly-β-amino ester) can be used for the safe and efficient delivery of DNA constructs into cultured cells. The double emulsion solvent removal method can be used for preparing the polymer microparticles, with dichloromethane as a solvent, and aqueous solution containing DNA plasmids or RNA-based constructs. Following homogenization and centrifugation, the lyophilization with mannitol can be performed to generate polymer particles used for DNA vaccine development.

Nanoparticles are non-viral vectors consisting of inorganic and organic particles and polymers, which can be used for gene delivery and avoiding the toxicity and compatibility problems if the natural biopolymers such as lipids, proteins, and sugars are used. These vectors ensure gene delivery into specific cells or into specific tissues, for cancer therapy, and also for diabetes, autoimmune diseases, and genetic deficiencies.

Nanoparticles consisting of polyethylenimine and tripolyphosphate can be developed using freeze-dry method. Scientists used nanoparticles for siRNA and plasmid transfection into cancer cell lines and primary cell cultures. Most DNA transfection reagents are incompatible with siRNA, which is sensitive to serum, and therefore, nanoparticles play a crucial role in RNAi transfection.

Altogen Biosystems is a life sciences company dedicated to the development and manufacture of in vitro cell type specific and tissues-targeted in vivo transfection reagents. Efficient delivery of plasmid DNA, RNA, and proteins is enabled by advanced formulation of reagents and specific design of transfection protocols. Altogen Biosystems offers a complete transfection system for a broad range of cell lines. All reagents are functionally tested to be highly reproducible, serum compatible, induce low toxicity, and can be used for co-transfection experiments, and high throughput applications.