Prostate cancer is considered the most frequent malignancy and the third primary cause of cancer-related deaths among men in the United States, according to the American Cancer Society. Black males have 74% higher odds of developing prostate cancer compared to non-Hispanic white men. With the 5-year survival rate of only 29% for patients with advanced stage disease, further preclinical studies for the development of new treatment regimens are necessary. The LNCaP human prostate adenocarcinoma epithelial cell line is established from the supraclavicular lymph node metastasis of a Caucasian male in 1977 and can grow in aggregates or as a single cell. The LNCaP cells grow readily in vitro, form clones, and are resistant to human fibroblast interferon. In addition to being receptive to hormones, the cell line has a high affinity for androgen receptors in the cytosol as well as nuclear fractions of cells. The cell line expresses prostate specific antigen, and estrogen receptors can be seen in the cytosol. The frequency of the tumor development and the time of tumor appearance are significantly different for males and females. Male mice do develop tumors sooner and at the higher frequency than females. Hormonal manipulations demonstrate that incidence of tumor development correlates with the levels of serum androgen. However, the rate of the tumor growth is not dependent on the gender or hormonal status. The LNCaP prostate cancer cell line is widely used in clinical oncology research. It is considered an appropriate host for studying prostate and hormone functions and is extensively used in drug discovery and different types of biomedical applications. Altogen Biosystems offers nanoparticle-based transfection reagent kits for the LNCaP cell line. 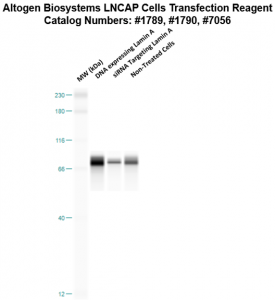 Figure 2. Protein expression of Lamin A in LNCAP cells. DNA plasmid expressing Lamin A or siRNA targeting Lamin A were transfected into LNCAP cells following Altogen Biosystems transfection protocol. At 72 hours post-transfection the cells were analyzed by Western Blot for protein expression levels (normalized by total protein, 10 µg of total protein loaded per each well). Untreated cells used as a negative control.