The HeLa cell line was established from cervical cancer cells, contributing to significant medical breakthroughs, including the development of polio vaccine. The HeLa cell line has been extensively utilized for cancer research. In addition to being the first immortal human cell with the ability to survive indefinitely in vitro, the HeLa cell line proliferates rapidly due to an active telomerase during cell division, resulting in the prevention of aging and cell death. The HeLa cell line was established using cervical cancer cells taken from Henrietta Lacks, a 31-year-old patient in 1951 who eventually died of her cancer later that year. The cells were derived from a tissue sample excised from the adenocarcinoma. The HeLa cell line has a modal chromosome number of 82 as well as four copies of chromosome 12 and three copies of chromosomes 6, 8, and 17. HeLa tests positive for keratin and lysophosphatidylcholine. Hela cells are also known to contain human papillomavirus 18 sequences. There are now many strains of HeLa cells, but all are descended from the same tumor cells removed from Lacks. Also, HeLa cells were used by Jonas Salk to test the first polio vaccine in the 1950’s. They have also been used in AIDS research, effects of radiation and toxic substances and gene mapping. Altogen Biosystems offers the HeLa transfection reagent kit for the HeLa cervical cancer cell line, an invaluable tool in conducting a broad array of specialized biomedical applications. 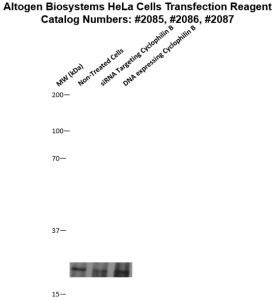