Lung cancer is considered the primary cause of cancer death, accounting for 14% of all new cancer diagnoses and responsible for 1 in 4 cancer fatalities, with the 5-year survival rate of only 18%, as stated by the American Cancer Society. The NCI-H358 epithelial cell line was established in 1981 by A.F. Gazdar et al. from bronchiole tissue of a patient with bronchioalveolar carcinoma, a type of lung cancer. The tumor tissue was removed prior to the patient undergoing chemotherapy. The NCI-H358 cell line has been known to have a doubling time of roughly 38 hours. Ultrastructural studies detected the presence of Clara cells. In addition to being an excellent transfection host, the NCI-H358 cell line is relevant in vitro model for research on medical treatments addressing lung cancer. Altogen Biosystems offers nanoparticle-based transfection reagent kits for this cell line. 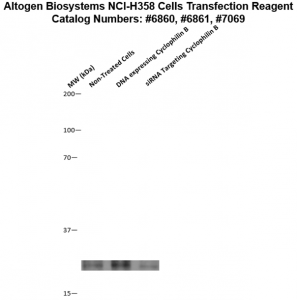