Pancreatic cancer remains a fatal disease as well as a significant public health problem due to its resistance to radiotherapy and chemotherapy. Furthermore, it has the lowest 5-year survival rate among all types of cancer, at 3%, as stated by Cancer Research UK. Preclinical research for novel drugs using RNA interference is a well-known laboratory technique that could help researchers find new therapies for patients with this deadly disease. An efficient transfection reagent, such as the AR42J Transfection Kit for pancreatic carcinoma cells, offered by Altogen Biosystems, can improve the outcome of this research. AR42J is a pancreatic cancer cell line that has proven to be a suitable host for transfection. The AR42J cell line was established using the pancreas tissue from a Wistar rat (Rattus norvegicus) that suffered from a pancreatic tumor. This tumorigenic cell line exhibits an epithelial cell morphology and produces amylase and other exocrine enzymes, which is inducible. It has receptors for glucocorticoid and insulin, which facilitate production. AR42J cells are known to reorganize their endoplasmic reticulum (ER) extensively. These cells make for a good transfection host and could be useful in many molecular and cellular biology studies. 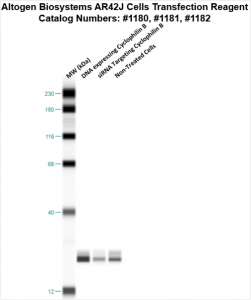